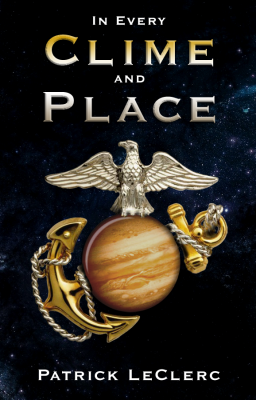 Patrick LeClerc has crafted a tense, military action adventure on the edge of civilization: Earth’s mining colonies in the asteroid belt. “In Every Clime and Place” combines the spirit of classic s/f of Heinlein’s “Starship Troopers” or David Drake’s “Hammer’s Slammers” with the isolated, small unit grunt’s eye view intimacy of George MacDonald Fraser’s “Quartered Safe Out Here.”
"In Every Clime and Place” is a frontier land grab; a tale of government corruption and corporate piracy, and a near future Marine science fiction story, told with gritty authenticity, gallows humor and raw emotion, evoking the closeness and isolation of a small unit deployed to the distant edge of a bleak and dangerous frontier.

Words to live by.

On the ragged edges of civilization, Corporal Michael Collins has lived those words, taking on riots and evacuations, rebels and terrorists. Asteroid belt patrol is just another deployment. Ninety nine percent boredom, one percent terror.

But soon the platoon of Marines find themselves entangled in the threads of a conspiracy of corporate greed, government corruption, piracy, and a band of war criminals.

As the fire team leader struggles with tensions in the close knit unit, Collins and his fellow Marines find themselves outnumbered in a pitched battle to stop a corrupt land grab that seems right out of the Old West, but on a new, wider, more unforgiving frontier. And now he must confront the harsh demands of being “always faithful.”

Semper Fi. Words to live by.

Words to die by.

Time to earn that combat pay, Marines. Welcome to the Suck.

And remember, you volunteered for this.